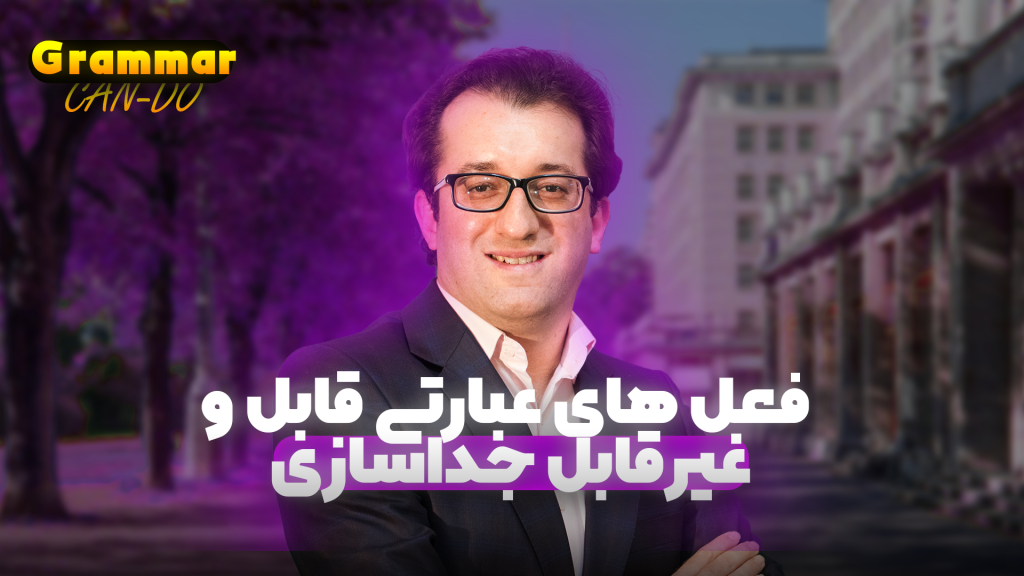 The rescuers called the search off because of the worsening weather.
(The noun search is between verb called and the particle off. Call off = stop doing something)

قابل جداسازی: Dad turned the television on.
(Turn on = switch on something so that it starts working.)

Someone tried to break into the warehouse during the night..
(The two words of the phrasal verb cannot be separated. Noun object warehouse comes after the particle into.)

غیر قابل جداسازی: She looks after her aging mother.
(Look after = take care of)

You can drop me off at the railway station.
Drop off = take or leave someone at a particular place

He deserved praise for managing to bring that off.
(Bring off = succeed in doing something difficult)

We must give this wallet back to its rightful owner.
(Give back: return something to someone)

She handed the leaflets out to whoever would accept them.
(Hand out = give something to one person or many people)

His part-time office job is to put the files away.
(Put away = return something to the place where it is usually stored)

I picked the boys up at the library.
(Pick up = get or bring back someone from some place)

We have been putting some money aside every month for a new car.
(Put aside = save [money] or keep [something] for the future)

He took days to throw those rotten apples away.
(Throw away = get rid of something that is not wanted)

She wrote my phone number down on a piece of paper.
(Write down = jot a quick short note of something)

They called off the match due to bad weather.

Call off = stop a planned event or activity from taking place)

They called on her for some legal advice.

Not: They called her on for some legal advice.

Call on = pay a brief visit)

We came across some old photos of granny in her school days.

(Come across = find something by chance)

He will look after my dog while I am away.

(Look after = take care of)

They looked through the drawer but couldn’t find it.

(Look through = examine briefly and carefully in order to discover something)

He pointed out the accused to the police.

(Point out = direct attention to someone [or something] by pointing)

I ran across the grandmother of my ex-girlfriend.

(Run across = meet [someone] unexpectedly)

Jack ran into Jill while he was on his way home.

(Run into = meet by chance)

She tried on a few pairs of shoes but they didn’t fit her large feet.

He had to turn down the job that was offered to him.

(Look after = take care of)

When she saw what happened, she broke down.

We decided that we should get together more regularly.
(Get together = meet and spend time with one another)

They shouted to him to hurry up.
(Hurry up = act or move quickly)

He asked them to join in the singing.
(Join in = participate or become involved in an activity)

We enjoyed looking around an organic farm.
(Look around = go through or explore a place)

He was given a week to move out after he fought with other tenants.
(Move out = leave a place [house, etc] where one has been living)

I had to pull over when I had a puncture.
(Pull over = move and stop a vehicle to the side of a road)

We waited but he didn’t show up.
(Show up = appear somewhere by appointment or unexpectedly)

After what happened, he promised to speak up.
(Speak up = say openly about something)

We stayed up late to watch the match on television.
(Stay up = continue to be awake)

The members came out with a set of proposals on reform of the club.
(Come out with = say or express something)

The police are following up on leads pointing to the whereabouts of the kidnapped victim.
(Follow up on = discover more or take further action connected with something.)

He’s wondering aloud how he could get out of meeting his mother-in-law this weekend.
(Get out of = avoid doing something)

He spends the weekends hanging out with a bunch of kids at the shopping centre.
(Hang out with = spend a lot of time with someone)

He often listened in on her phone conversations without her knowledge.
(Listen in on = listen secretly to a private conversation)

We always looked up to him for his courage.
(Look up to = respect or admire [someone])

I’m saving more this month to make up for a withdrawal last month.
(Make up for = compensate; or have something to correct or take the place of something else)

She shopped the whole day at the sales and never seemed to run out of money.
(Run out of = use up something so that none is left)

We have to stand up for ourselves.
(Stand up for = defend or support [someone or something] against attack or criticism)

Someone walked off with my bag of groceries when I wasn’t looking.
(Walk off with = steal or take something without asking for permission)